Actually, to be honest, the term 'review' is a little grandiose. Here are some thoughts on the game of early-war Blitzkrieg Commander (in 10mm) that Philip put on at the Warlords last night for the noobs (me and Phyllion). 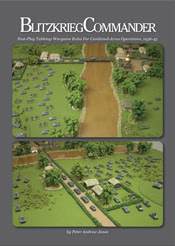 The scenario we played was that I - the German player - had to cross the table, seize the town, and destroy two bunkers occupied by dug in French conscripts, machine guns and anti-tank guns. Meanwhile Phil would command the French reserve, consisting of some heavy armour (Char B1s and some other french armour whose name I've forgotten) and a few mechanised units who would arrive on turn two. To do this I had one command (CV9) in the centre with 2 Panzer IVs, 4 Panzer IIIs and 2 Panzer IIs and another command (CV9) with 6 infantry units in trucks, a mortar and truck and a 150mm self-propelled infantry gun (this thing was a beast)  up the right flank. The CO (CV10) had a recon armoured  car and a towed 88m gun. The French player was dug-in around the town and right-hand bunker.

The BC ruleset turned out to be pretty good. It is necessarily abstracted, given that each base represents a platoon, but conveys a sense of both fluidity and friction through the command system (based on the Warmaster system of command values) and suppression/initiative/opportunity fire rules. The fundamental mechanism of the game is the command roll; a 2d6 test which allows your units to take an action e.g. shooting, moving, assaulting. There is no limit to the number of orders you can give with a command in one turn but there are penalties for each successive activation as well as other factors such as opportunity fire and distance to command. This means that (as happened fairly frequently) a decent run on the dice can see your units move and shoot numerous times, I think one turn I got about 5 actions with one command. This is great because it puts an element of unpredictability in the mix - your units could activate multiple times and get round that flank, or blow up that tank, or they might just sit there.

The shooting mechanics were very simply but effective, each unit has an anti-personel and an anti-tank rating, each expressed like so e.g. 3/60. This means 3 dice (d6) up to a range of 60cm. You roll the dice, 4+ is a hit (with some modifiers for target size etc) and some units (like tanks or dug in infantry) get saves which vary e.g. My Panzers all had armour 6+ whilst the Char B1s had armour 4+ (the latter lit up my Panzers quite successfully). Each hit is then rolled for, on a 4+ the unit is suppressed, which stops it from activating next turn. Hits are discarded at the end of the turn, so you have to kill a unit in one go, this encourages the concentration of fire-power. Assault works fairly similarly with a series of dice additions or subtractions for factors such as suppression, outflanking, supporting units etc.

The game went something like this. I sent my tanks straight up the centre onto a hill and pushed the trucks down the right-flank as fast as possible. They took a few hits from the bunker which opportunity fired but non were lost (or even suppressed luckily!). The 88 moved into position to hit the bunker from long-range and failed to do anything of note for half the game. The self-propelled gun smoked up the bunker and made it easier to get close, however, it also blocked the 88s LOS (this was a school boy error). The tanks in the centre nibbled away at the french AT guns and managed to avoid taking any really damage, I think I lost a Panzer II, whilst taking out a 75mm and a 47mm AT gun. The trucks eventually reach the bunker and dismounted, and the engineers flanked it and blew it up without any trouble. I then put in an infantry assault on the hilltop and cleared out the 2-3 french infantry platoons up there with assaults and small arms fire. Meanwhile in the centre the French armour had arrived and after a few false starts (the french have pretty poor Command Values) got into a decent position and preceded to take my lightly armoured panzers apart whilst my shots pinged off their 4+ armour saves. I lost most of my tanks over the next 3 turns or so. However, the infantry made good progress on the flank and with some great supporting fire from the 150mm IG and mortar (which I'de forgotten about for half the game) rooted out some of the french infantry hiding in the town. I realised that the 88 was needed on the centre hill (to hit the French armour) and pretty rapidly redeployed it with my CO and starting inflicting some hits and suppression (but no kills) on the French armour. As time run out my 88 was about to start making some good progress on the tanks (or switch to the bunker on the left and take it out) and my infantry, including some assault engineers, were just moving into the town to clear the buildings of the french infantry rump. It was a pretty close run thing and it could probably still have gone either way if we'd have had time to finish the game.

Oddly one of my favourite moments was re-deploying the 88, so many games seem to include limbers/tractors for guns but so rarely are they actually useful, one of the advantages of a game with this level of scope is that mobility really does matter in way that in 28mm, or even 15mm, it doesn't really seem to.