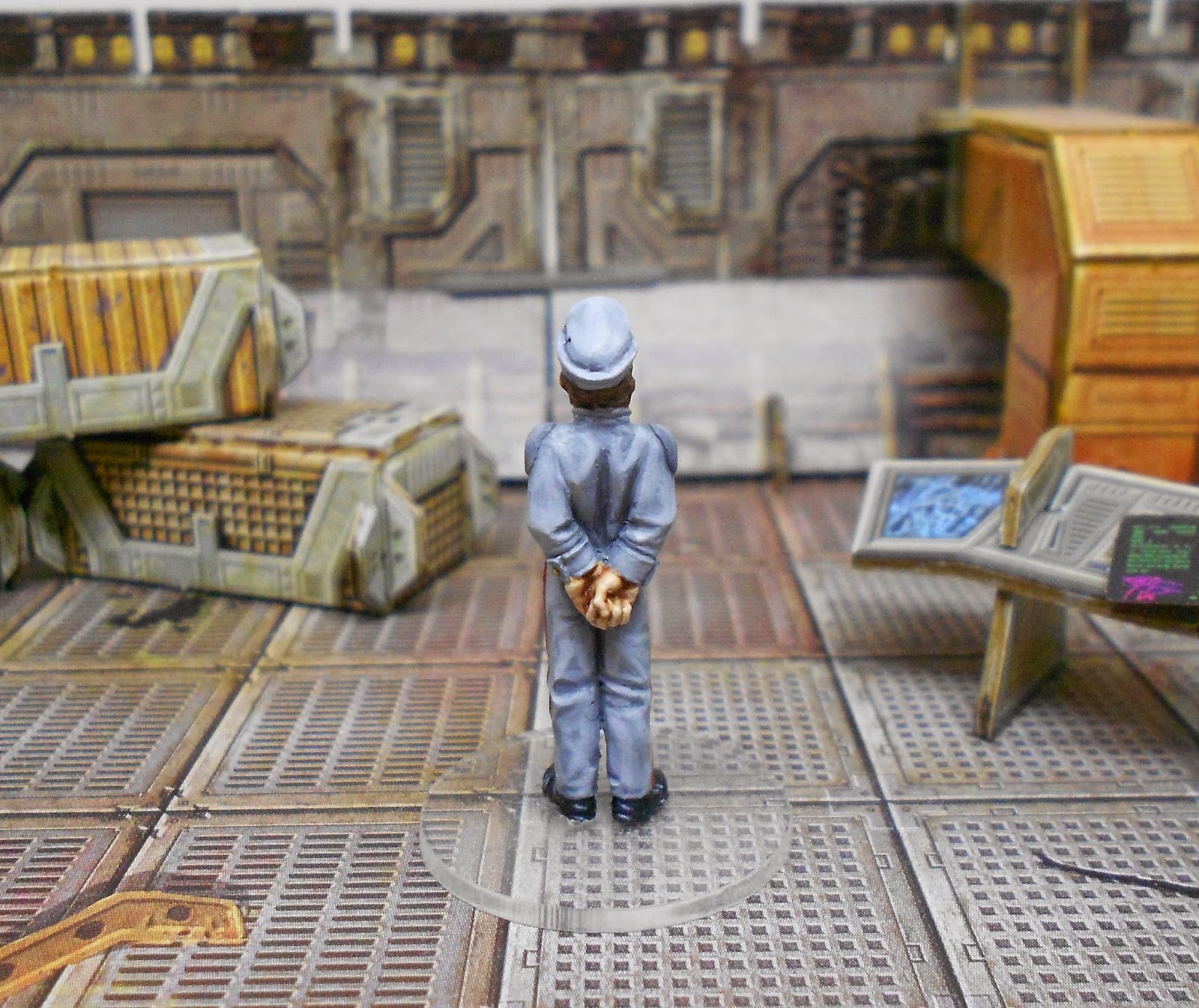 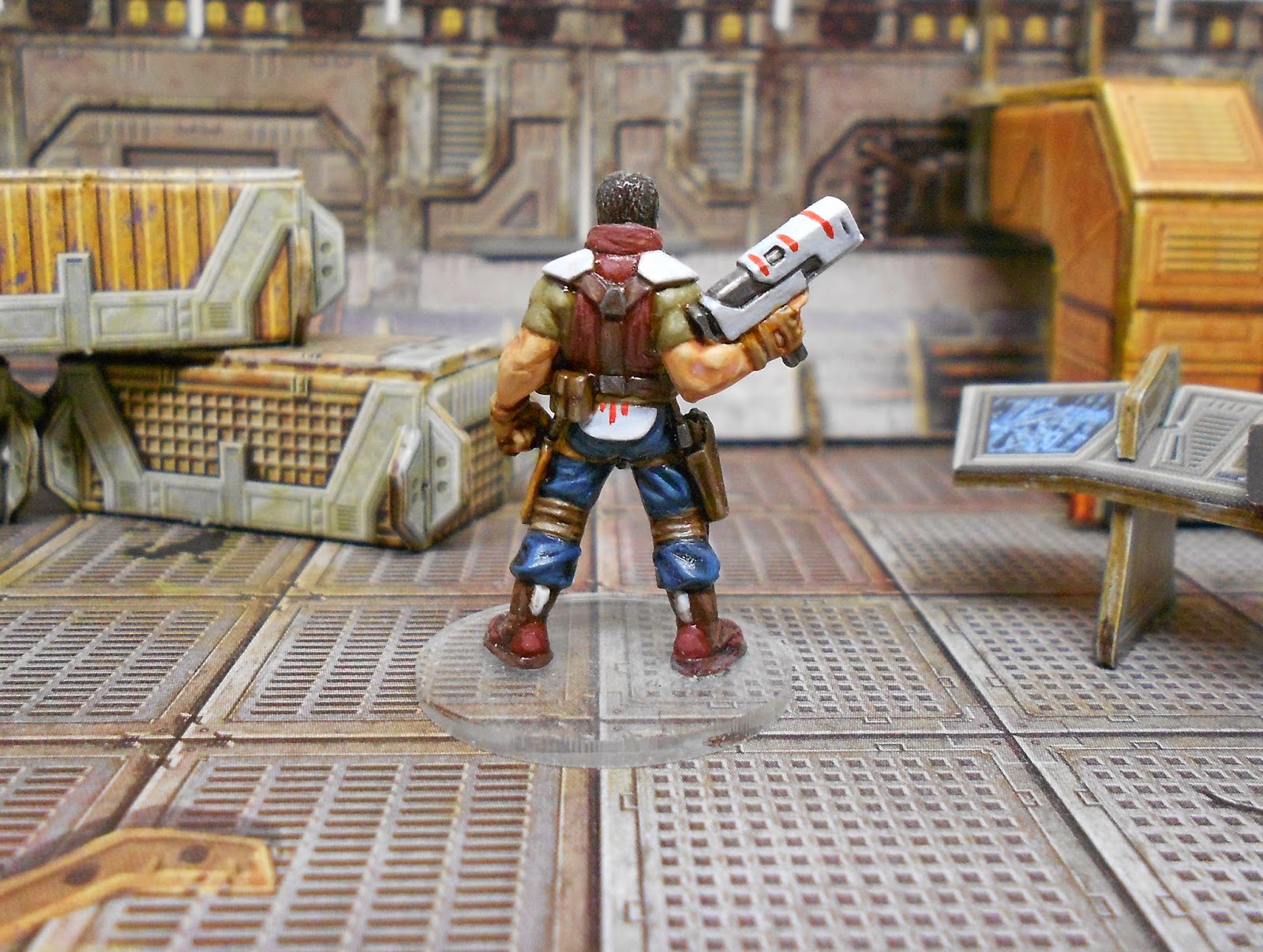 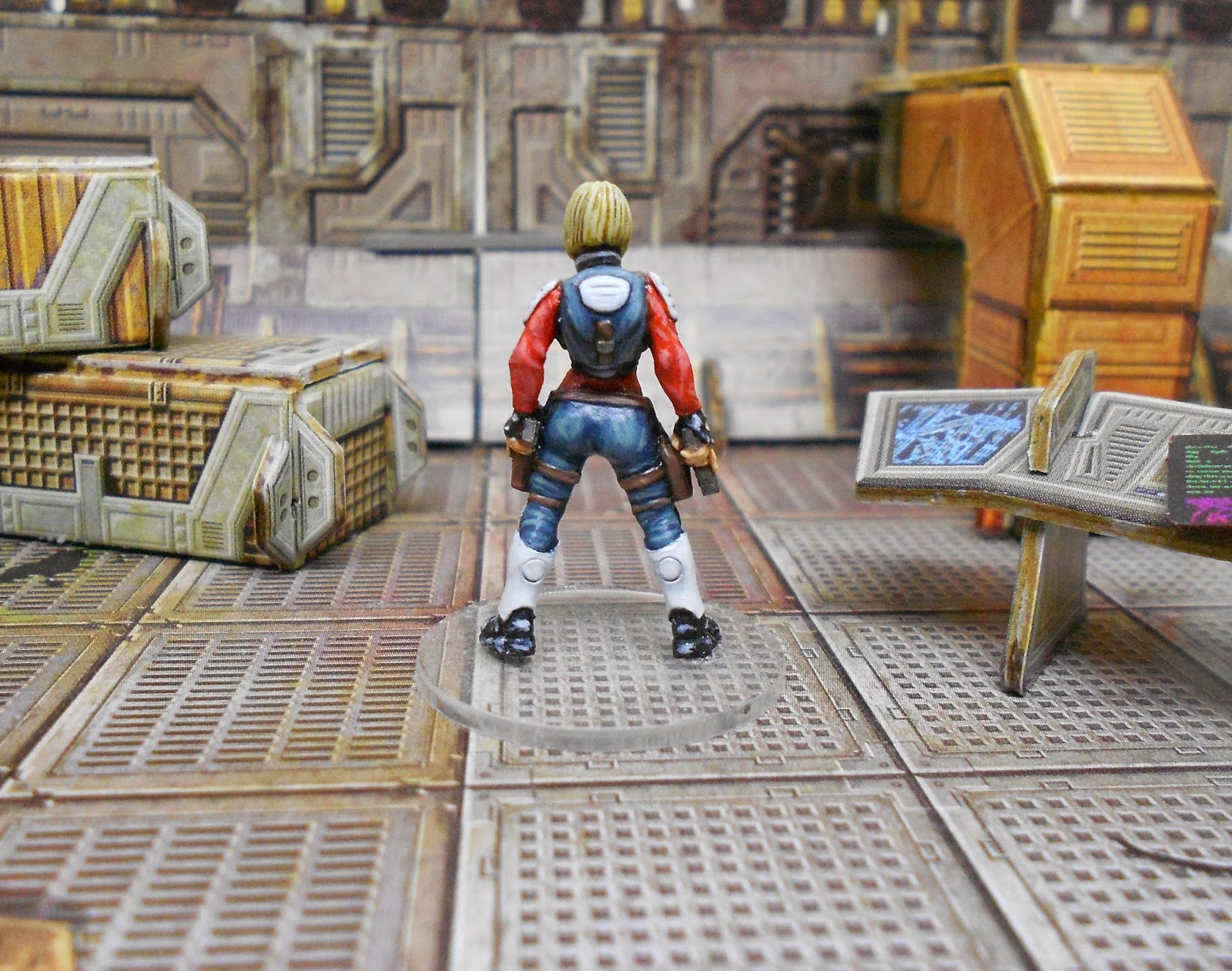 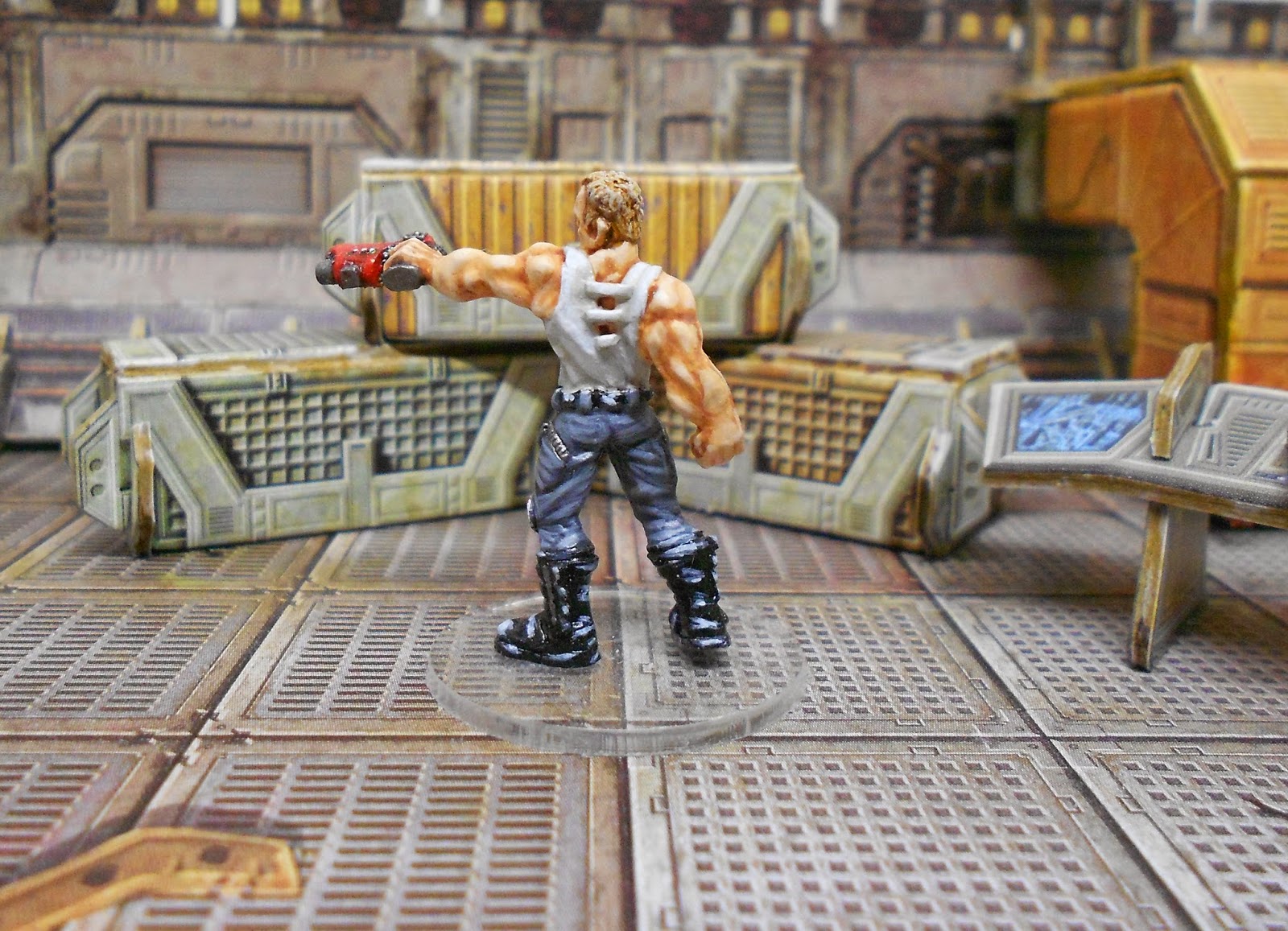 I finished painting up Zoe over the weekend. I now have the core of the crew in terms of the 'away team' painted up (Mal, Jayne, Zoe) and some opposition - 8 Alliance troopers (I did 3 more at the same time as Zoe) with an Alliance officer well on the way.  This puts me in a good place to play a game once I've finished putting together a bit more of my battlesystems terrain (some of which you can see in the background to the shots).

I've been a bit distracted from my pulp project by a certain space western that had an unfortunate case of Kurt Cobain syndrome...

Pulp Alley is a very flexible ruleset and I can see it fitting the firefly universe perfectly, so buckle in for some thrillin' heroics as I run through the first few characters I've painted up from the show. 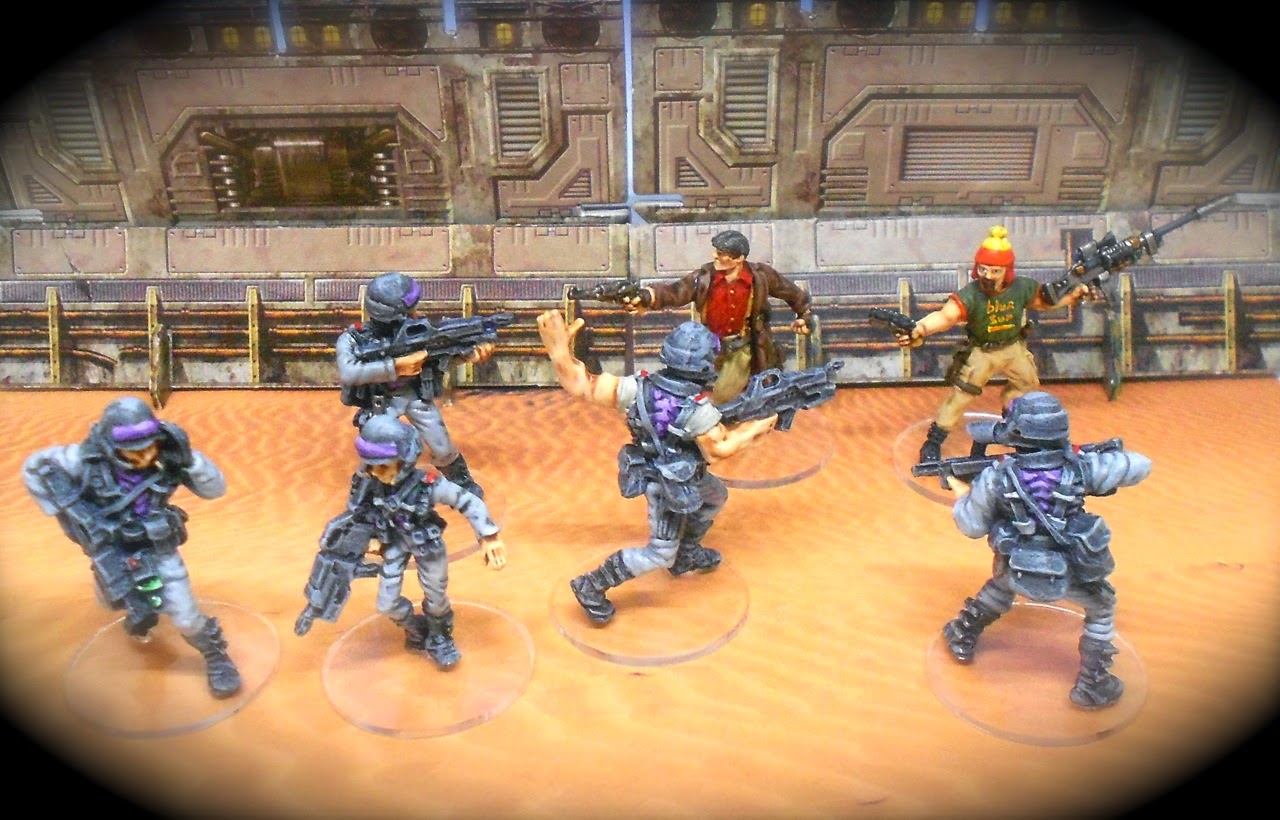 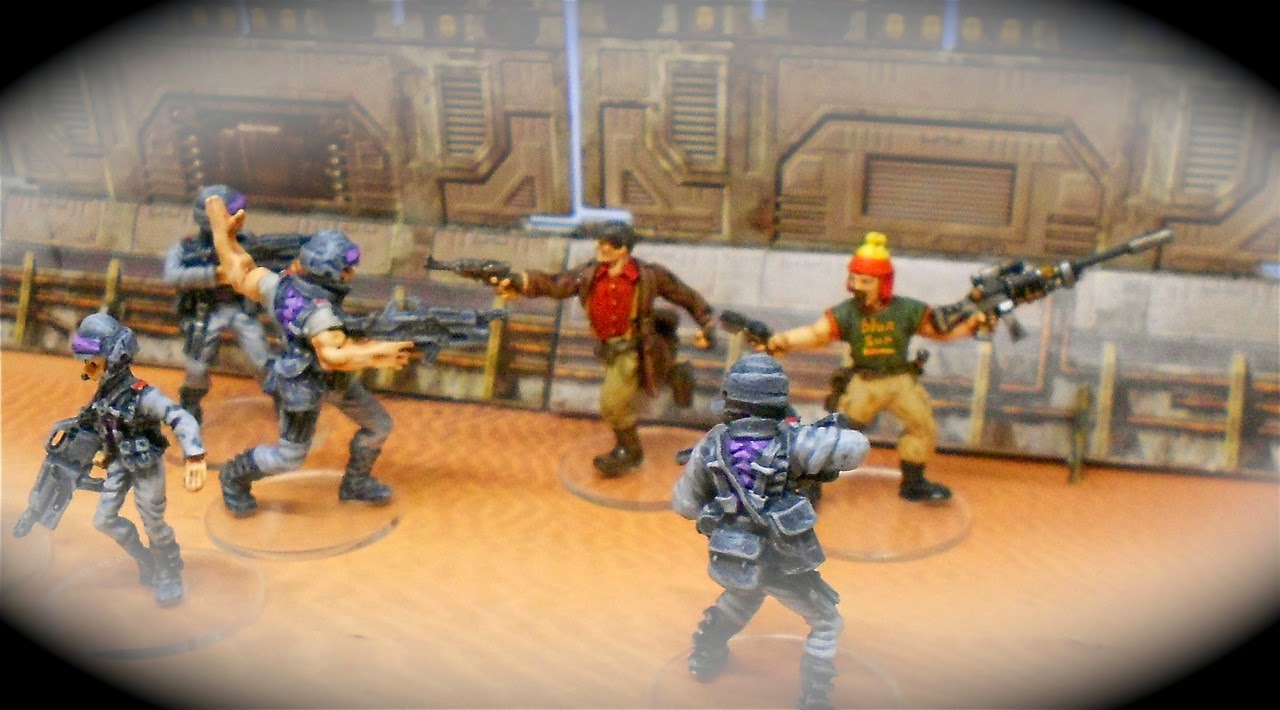 I've become pretty fascinated by the new ruleset from Ivan Sorenson (five parsecs from home) which merges miniatures wargame and RPG. I'm not a huge fan of the 5 core system the supplement builds on, it looks a bit basic and the lack of stat lines is a big turn-off, but I really want to do some kind of mash-up of pulp alley, 5 parsecs, the firefly boardgame and then mix in RPG elements... just need to find the time to write it...

On the plus side my boardgame group just progressed to RPGs (first game of D&D last week -  which we thoroughly enjoyed) so I may be able to tempt them with the Firefly RPG in time.

Thrilling Adventures: More Pulp figures painted up and ready to throw down.

Without much ado here are some more pics of my painted pulp figures for pulp alley (still haven't gotten round to playing, although close on terrain now). They're done using the Dallimore 3 colour method, which gives good results for the time invested - around 2 hours per figure. 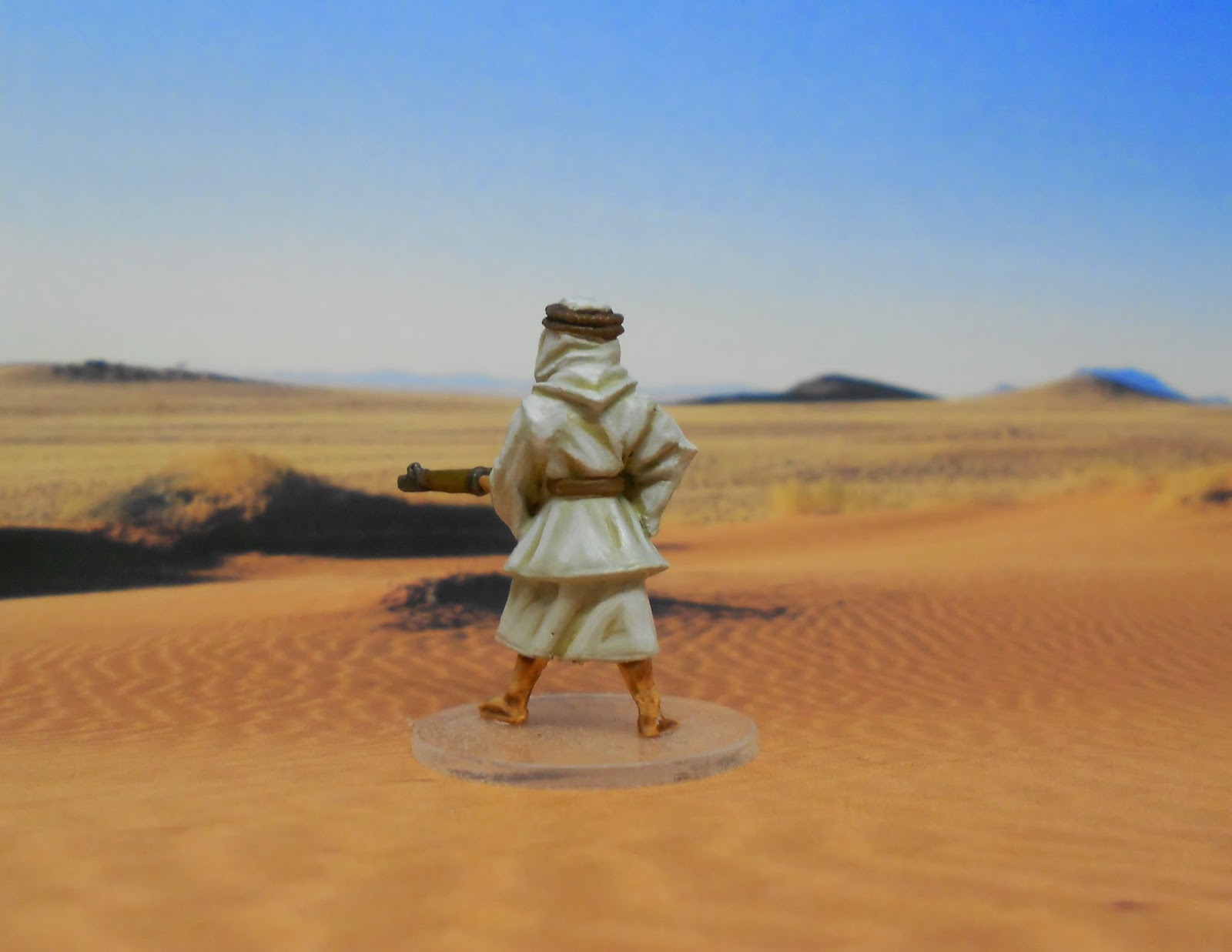 If you liked these -  leave me a comment. I really should post more but sometimes its hard to find the time...

Superb sculpts, superb casts and really easy to paint. Will be getting more copplestone gangsters for sure!

There is a fourth member of the pack -  but I seem to have mislaid them somewhere in the painting process... 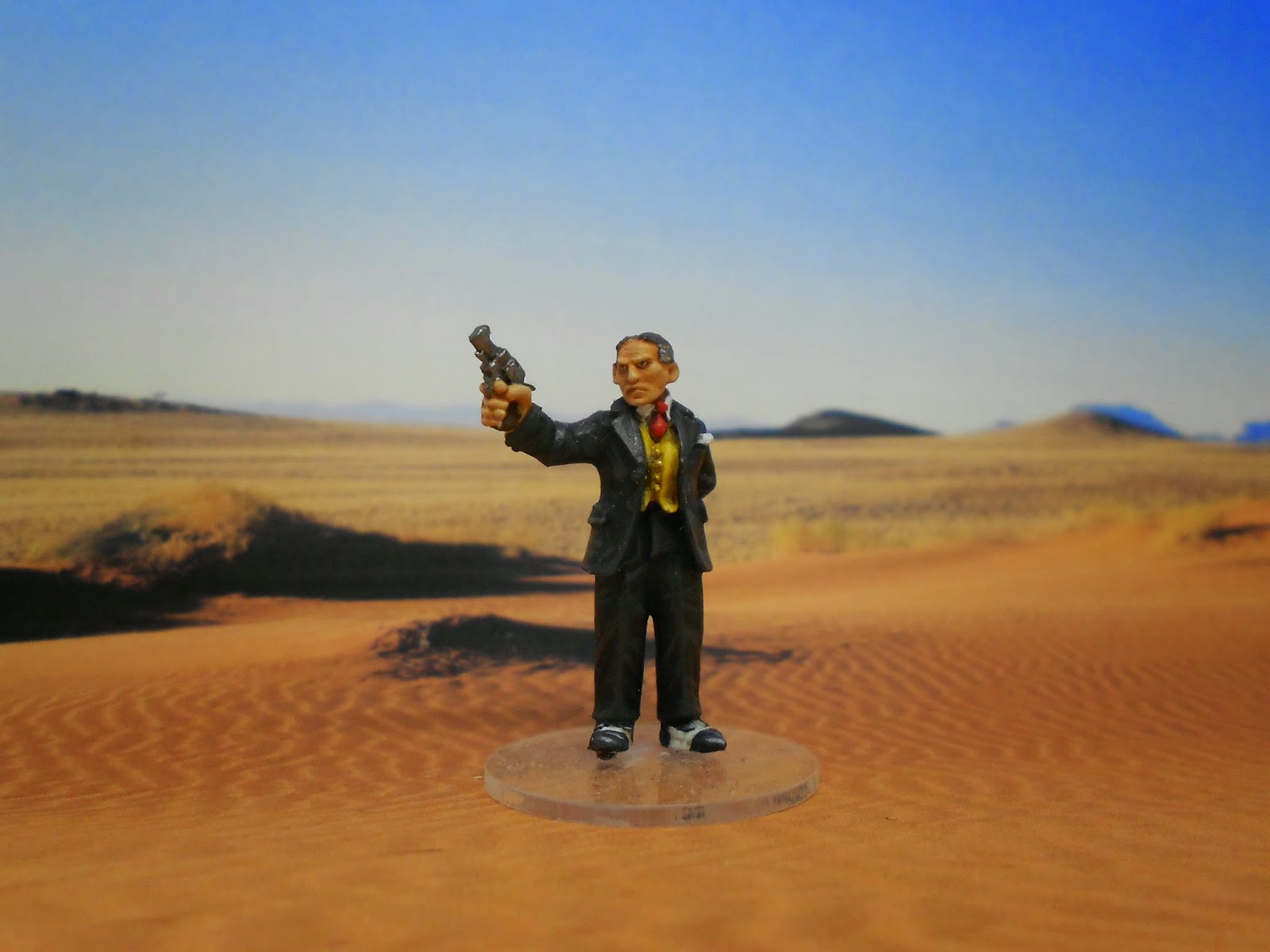 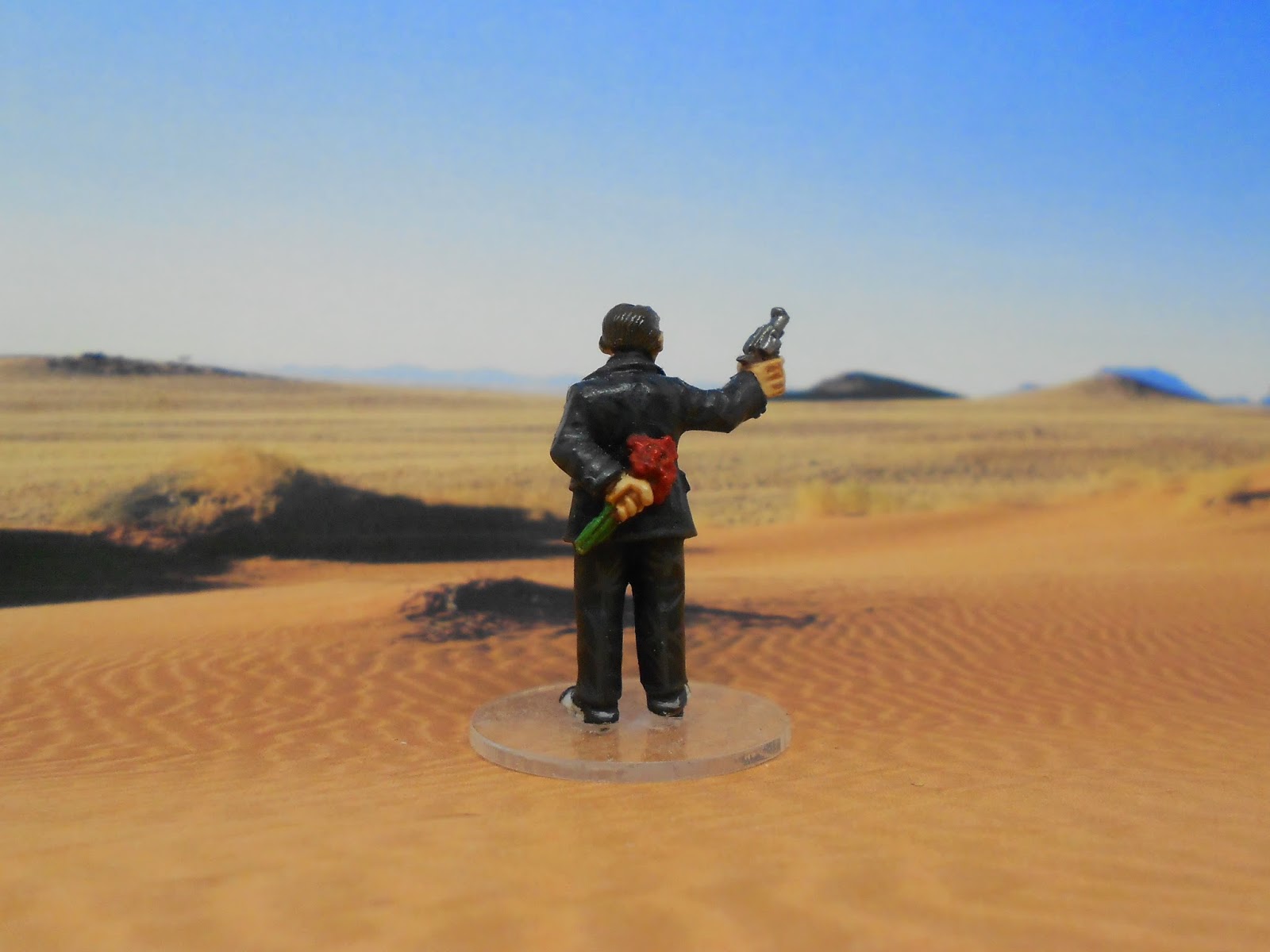 I love the brooding menace of this figure. The facial expression is superb and a real pleasure to paint -  if only all minis had such well sculpted faces! I went for quite subtle highlights on the dark suit (rule of thumb -  never paint anything black, just very dark grey) and like how it turned out. They're slightly brighter in person. 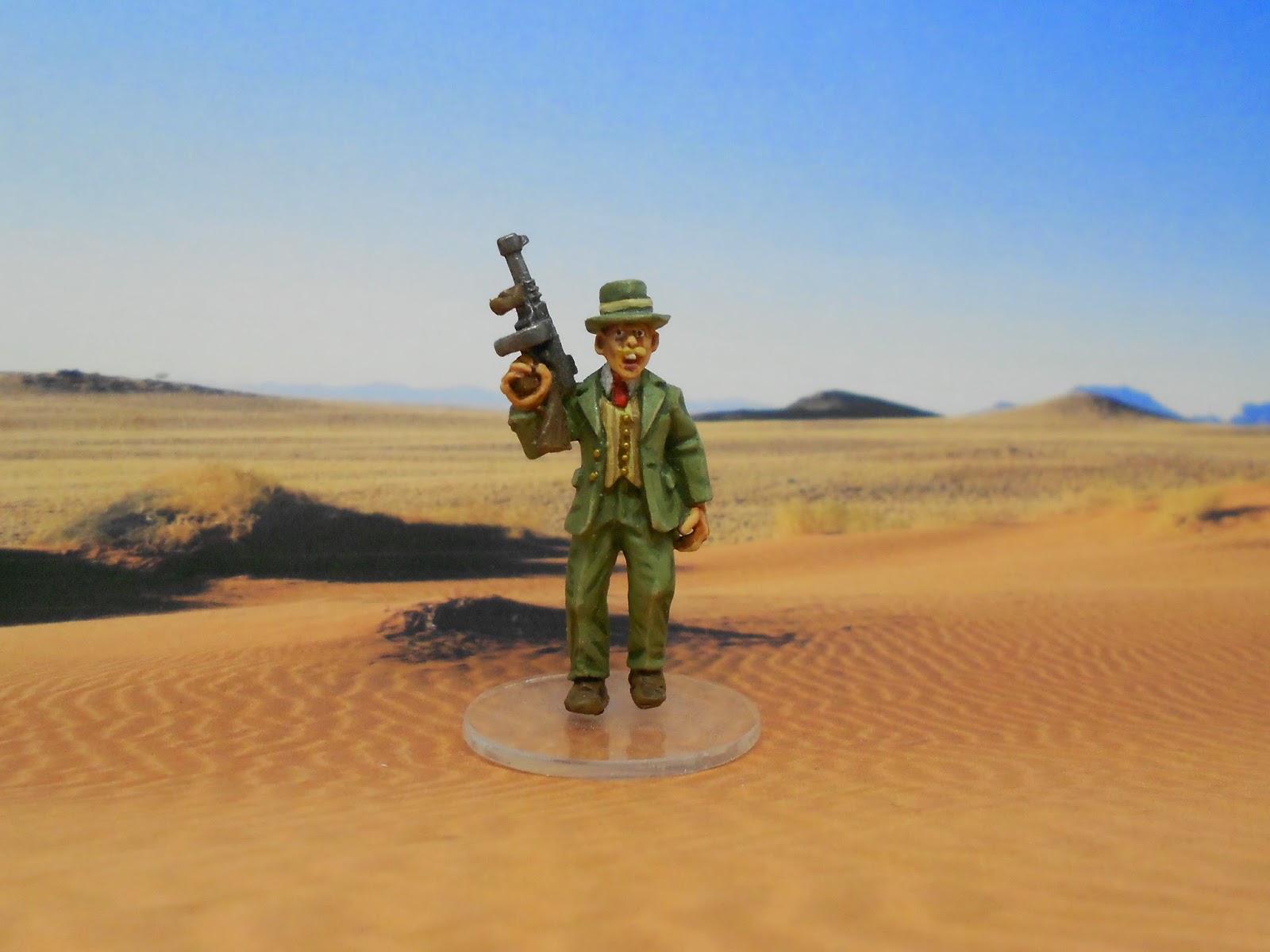 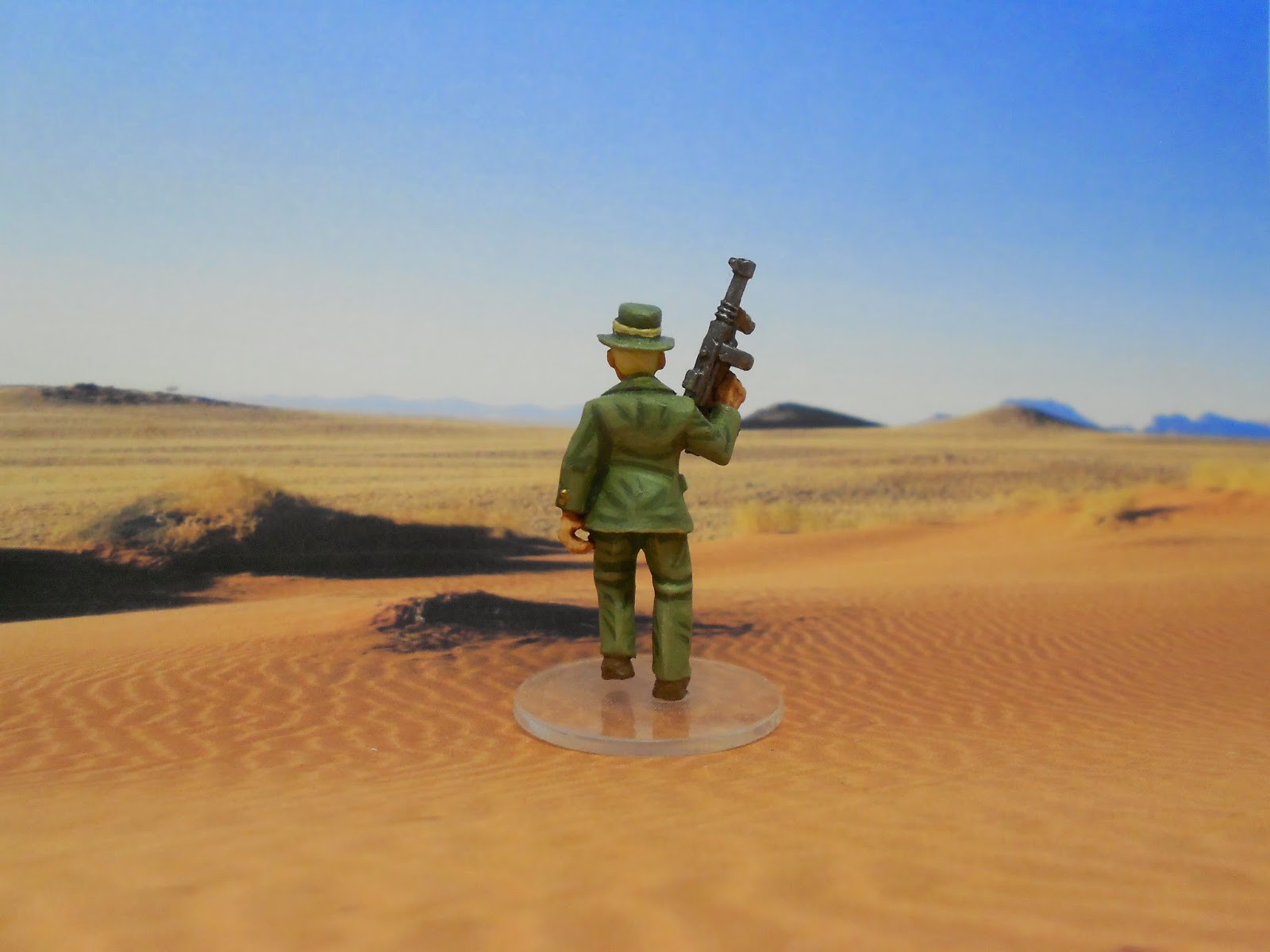 As you can see on these figs, I've had a bit of a breakthrough on eyes (basically, I finally used a decent sable brush...) and I really like how it brings them to life. 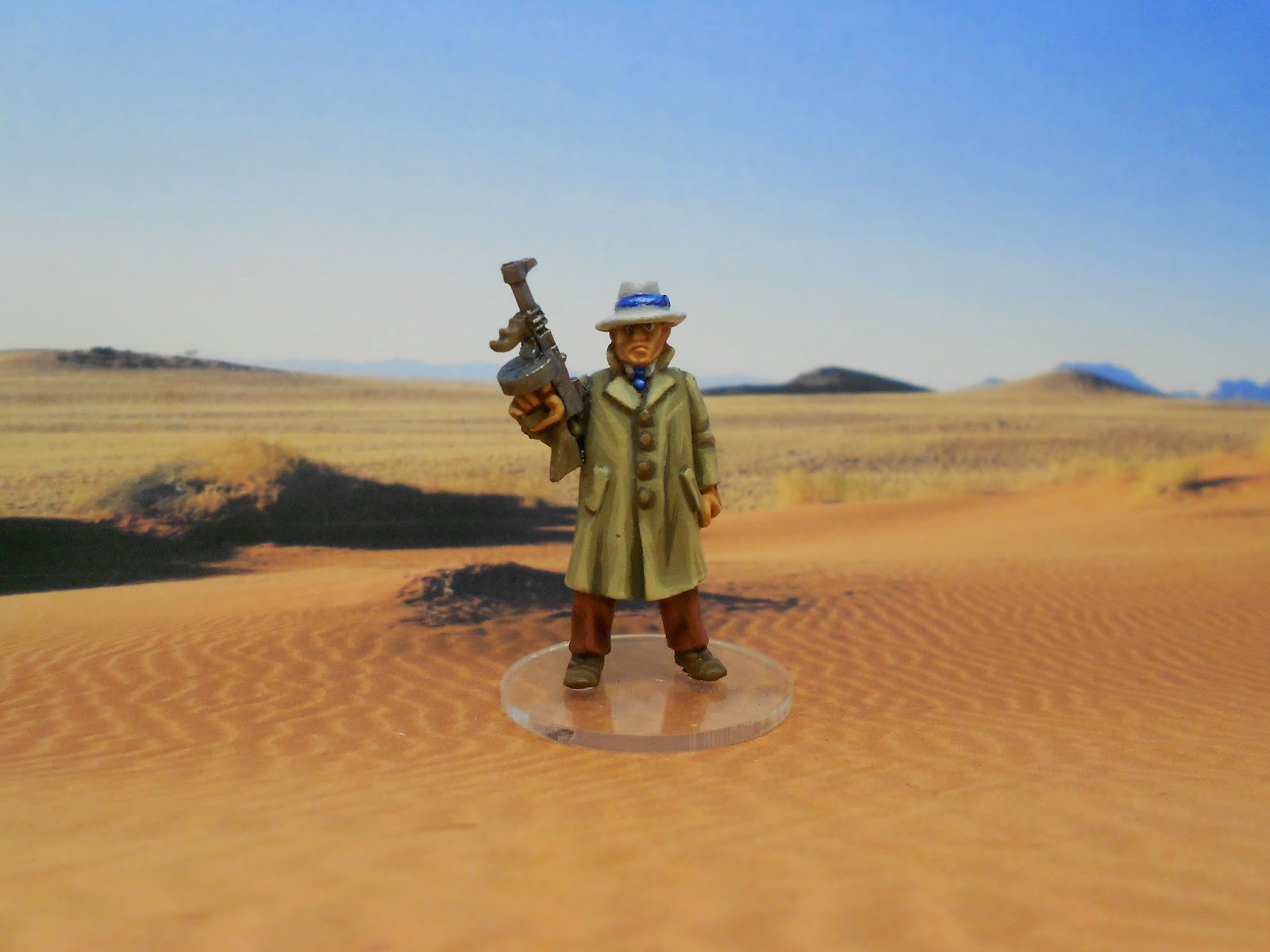 I was really pleased with how this suit came out. He's a rather dapper fellow. As I've built up confidence with cloth I've started adding in extra folds and creases where I think they should go. The creases on here are about 30% made up. 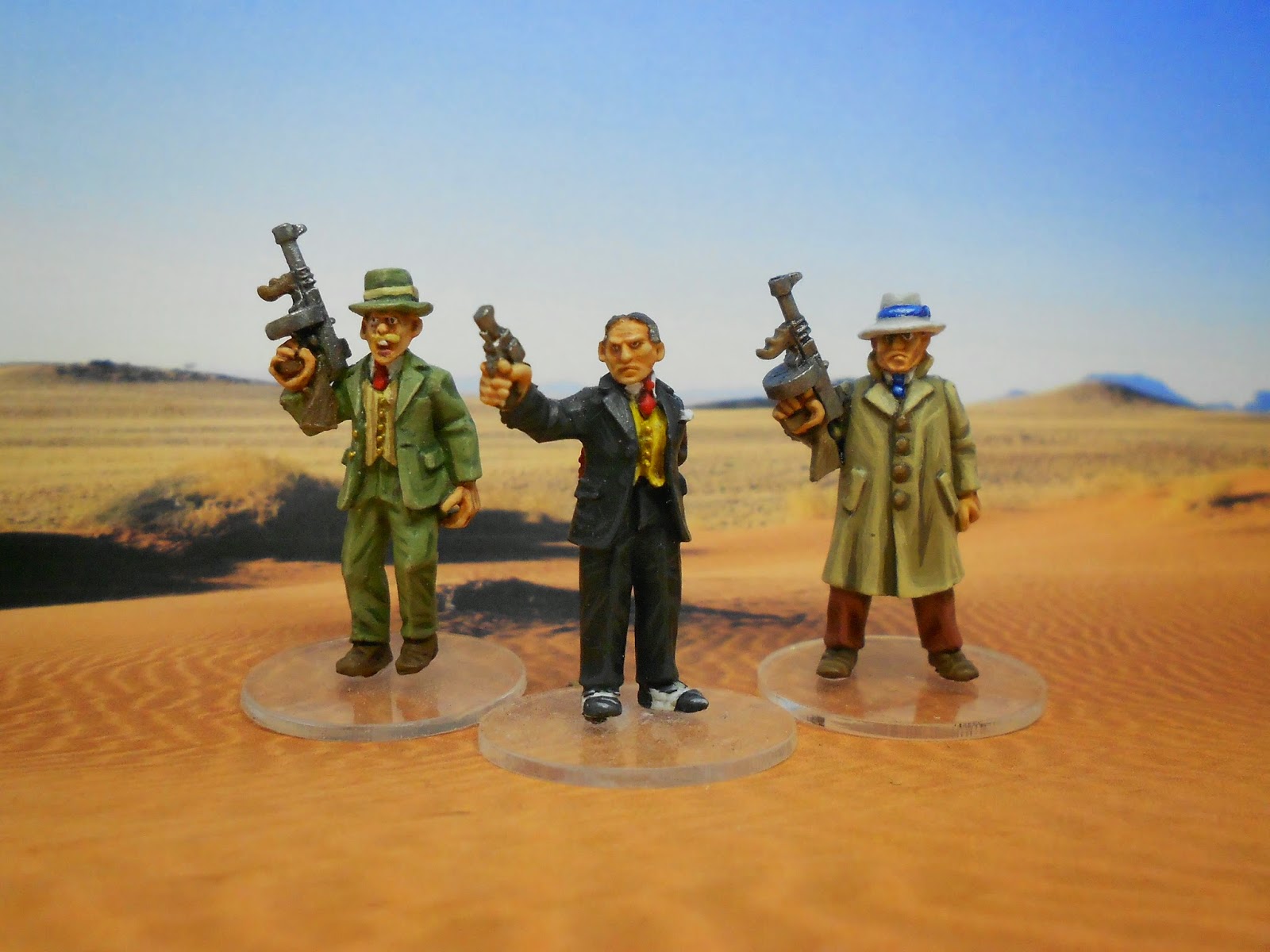 The gang together. In pulp alley terms they will be the core group (leader with 2 allies) and then I'll bolt on additional allies and followers to match the setting. First adventure is in Egypt, so they need some hired help to make sure they get through the desert ok and don't have to do any actual digging when they get to where their client said the artefact would be...

Need to put a date in the diary with my housemate for the first game. Pretty much there now with figures and terrain. Just a few things to finish up (and the rules to re-read, and story to write).
Posted by Samulus at 22:25 2 comments:

Back in the saddle at last... and pulp is on the menu.

Well... its been a while. Happy to say that the hobby has carried on but did take a big hit when I changed role at work. However, I've since moved to a new role where I get some of my spare time back -  so some time to think about blogging again!

This has really been aided by the foldio, a very portable and cost effective mini-studio that was launched via kickstarter, which arrived a few weeks ago. Taking decent (although not amazing photos) is now a lot lot simpler and has encouraged me to get blogging again.

So, I give you my first post in a while. Our good friend Dr Jones. 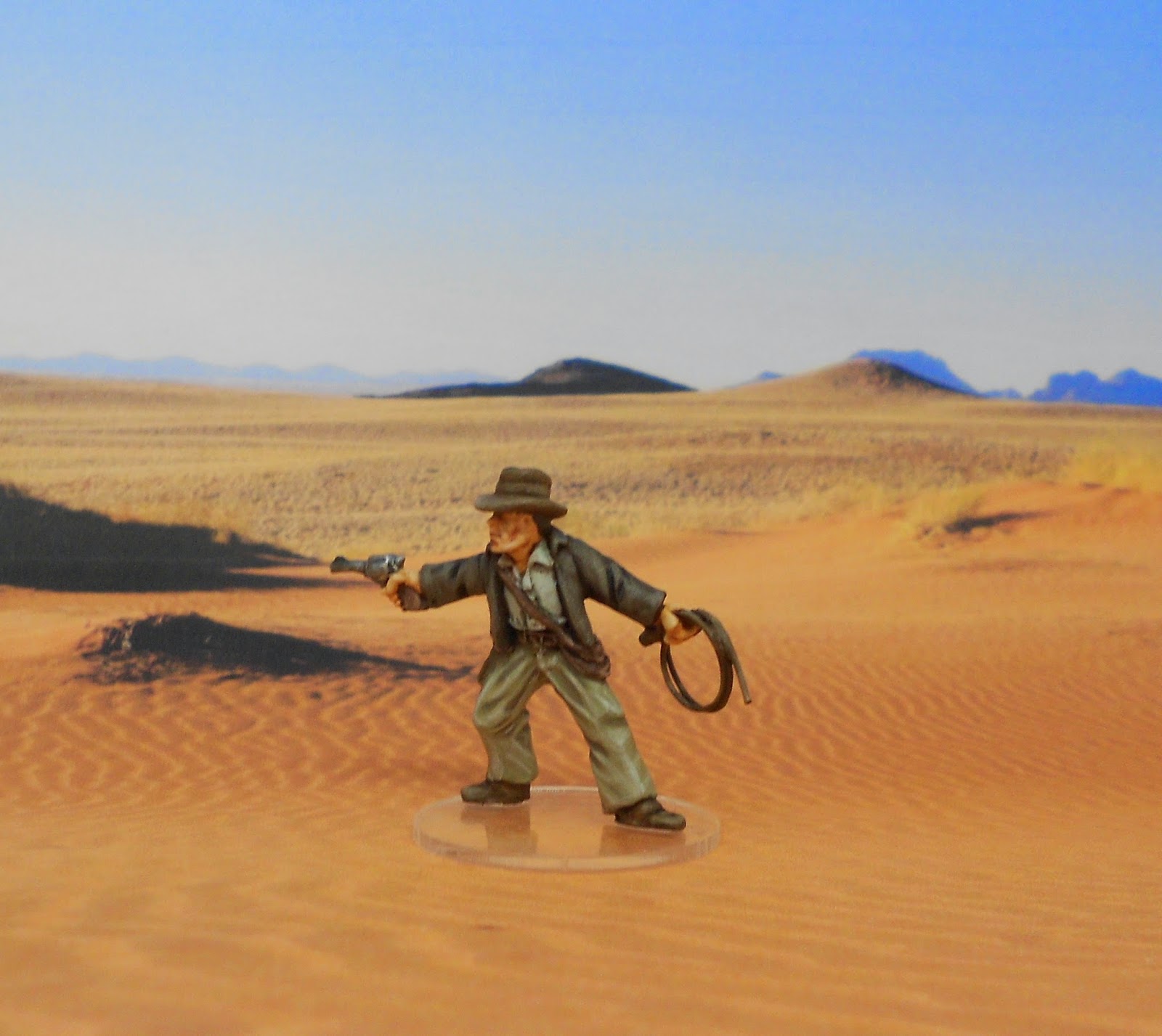 The original figure is from Artizan. It looks quite like Indy but to get the whole look I added the whip (drilled out the hand, coiled some fishing wire and fixed with superglue), the satchel (greenstuff -  and one of my better sculpts, I think I'm getting better) and holster (on the leg that you can't see in this photo). These bits just complete the look for me and make it into our favourite rugged archaeologist as opposed to a 'similar guy'.


A slightly blurry 'warts and all' close-up. The face on the cast/sculpt is not the best. I've been spoilt by the copplestones I've been painting recently - they just paint themselves. This was a much trickier proposition and I'm still not all that happy. I was thinking about adding some 5 o'clock shadow but just don't want to tamper with it anymore frankly. 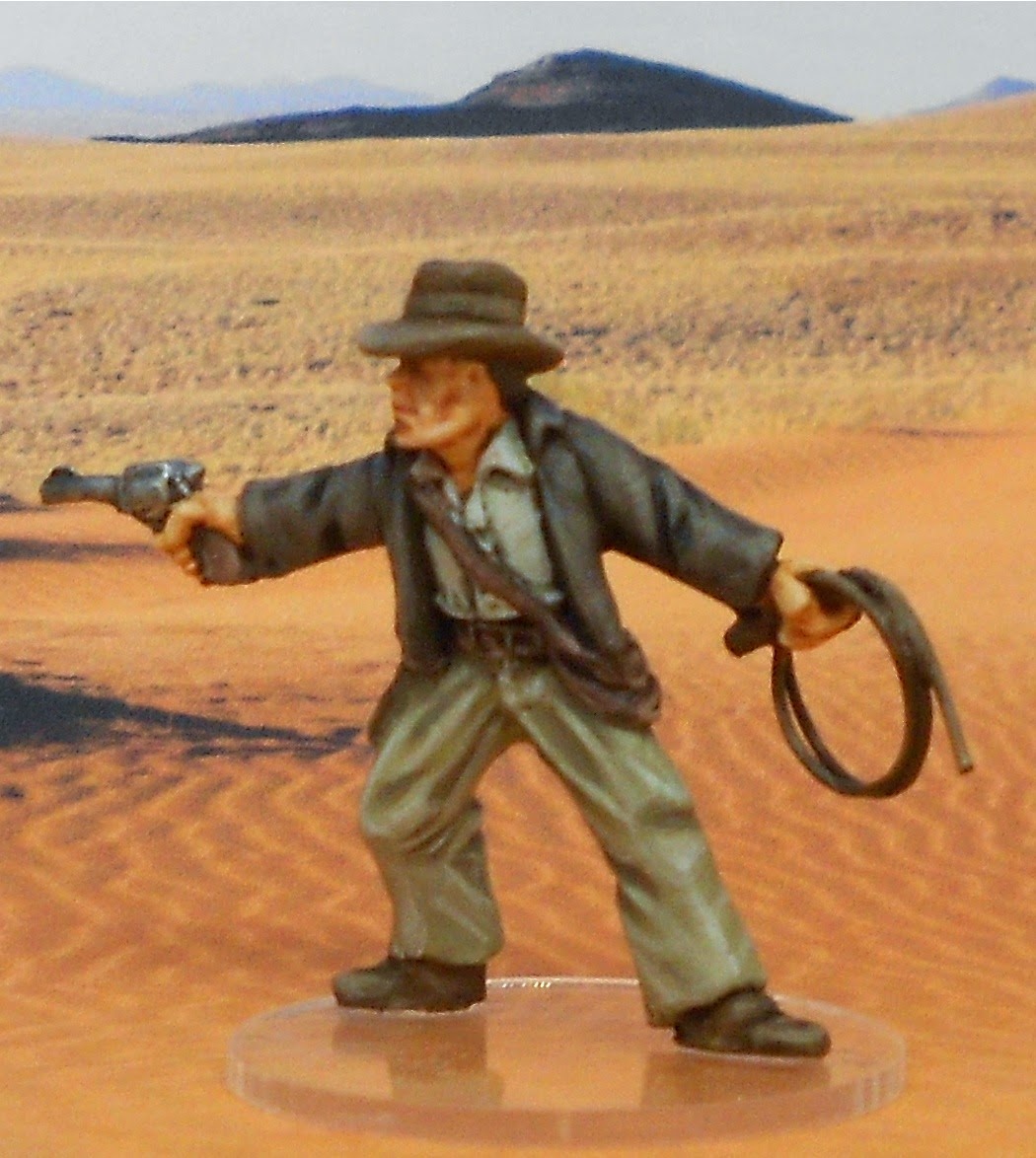 As you can see, I'm a fan of the clear acrylic bases. They have two killer pros for me - a) they go with any terrain (which is a must for pulp globetrotting) and b) they require no work at all (I get to spend more time painting and less covering things in sand). Figs can break off quite easily but I really don't see this as a problem -  just pop them back on with some superglue! These ones are from Litko.

Those who've seen my painting in the past will also know that I've changed styles. I used to be an aficionado of the wash (slap it on allover, lovely jubbly) but have since moved on to much greener pastures. Now I only use them much more subtly - pin washes are the order of the day - and sparingly. The only thing washed on this figure was the skin (flesh wash on a elf skin base, then highlighted up 3-4 times with white progressively) and the gun (nuln oil). Everything else is layers (usually 4 - shadow, base, highlight, extreme highlight but sometimes more or less to taste).

I started experimenting with this method when repainting some wizkids star wars figs about 6 months ago (this was when I first broke out the clear bases as well) and liked the effect. Reading Keven Dallimore's great books (which my GF got me for my birthday -  I'm a lucky man) has cemented this and given me a few more tricks.

As you can see from this post, pulp is the order of the day. I've been painting 2 leagues (for pulp alley) with terrain. First adventure is Indy in Egypt. More to follow...