I got a chance to play Shadows over Camelot earlier today with some friends and thought I'd put my impressions down. I didn't have a camera handy so I'm sourcing my images from the web, in truth the game looked just as good in the flesh as in these pictures.

As you can see from the images below (these were collected from the web and are perfectly representative of the quality of the components) they component quality is very high. I'm used to the kind of quality available from large manufacturers such as Fantasy Flight Games (I have their BSG boardgame which is excellently made) and this game did not disappoint. The artwork is good and the cards and boards all have high quality illustrations. They're exactly as you'd expect. 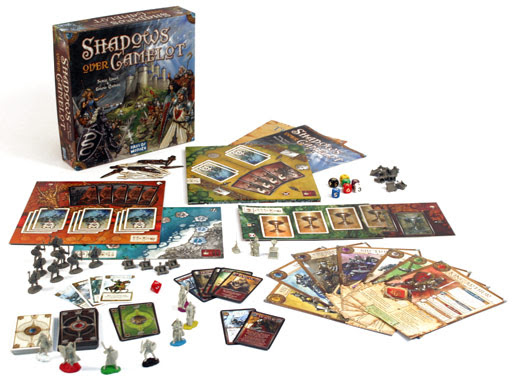 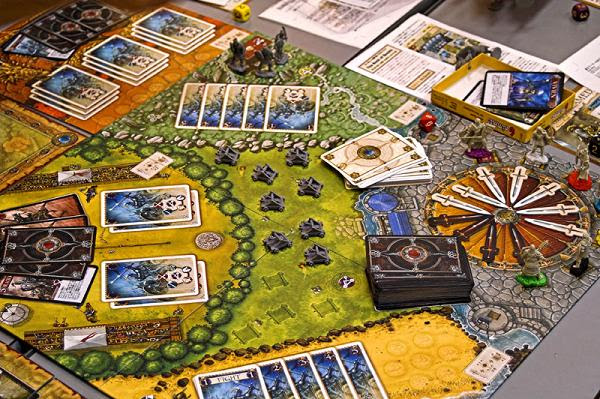 The miniatures are extremely detailed by boardgame standards and would even stand up well on a wargames table, though they are not 'collectors' quality. The makers of the BSG components would have done well to learn from them. Unfortunately they are made from a relatively soft plastic which gives the weapons a tendency to bend and droop. The poses are also a little stiff and uninspired. I can't personally comment on how well they take paint as I haven't tried (the game isn't mine!) but other have painted them with great success.

Some players have gone even further and re-created the board in 3D - the results are staggeringly good! I don't think I could ever hope to match how well these have been done. Bravo lads! 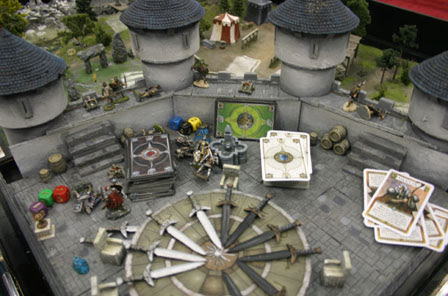 
The game is relatively complex due to the number of simultaneous quest boards in operation but the principles are extremely simple - like any good game. Players select/draw a character, each character is identical except for their special ability. Special abilities range from King Arthur's ability to swap a card from the controlling player's hand with a card from another players hand once per turn to Galahad's ability to play 'special' White cards as free actions - overall they are extremely useful.

The game board consists of a number of satellite quest boards (The Grail Quest, the Excalibur Quest and the Lancelot/Dragon Quest) as well as the main board which is divided into 4 main zones; the Black Knight, the Pictish War, the Saxon War and Camelot. There are two decks of cards, White and Black. The White deck contains cards which help the players, such as Fight Cards, Grail Cards (to complete the Grail Quest) and special cards, including Merlin cards (which allow black cards and negative effects to be reversed or ignored). Black cards have negative effects; they reduce progress on the Grail or Excalibur Quest, add enemies to the Pictish/Saxon Wars, add catapults to besiege Camelot, and add Fight Cards to the Lancelot/Dragon and Black Knight Quests. The Black deck also contains rarer 'Special' Black cards with more varied and dangerous effects e.g. The Mists of Avalon, this card remains in play and adds another Black Sword to each failed quest. Nasty.

Players draw cards (but only whilst in Camelot) and then must travel around the various boards completing quests; failed quests lose life points and add Black Swords (negative victory markers) whilst completed quests gain players life points and add White Swords (positive victory markers) to the Round Table in Camelot. The precise mechanics vary from quest to quest; some involve discarding cards, others amassing Fight Cards either in matching pairs and triplets (in opposition to accumulating Black Fight cards) or in numerical sequence. The Grail Quest is the most difficult to complete (with the exception of the Dragon) but unlike the latter also provides a substantial benefit (3 White Swords, Life points and the Grail itself). Magical items such as the Holy Grail, Lancelot's Armour and Excalibur are won as rewards for completing quests and provide bonuses e.g. Lancelot's armour allows the player to overturn 2 Black cards at the start of their turn, pick one to play, and place the other at the bottom of the deck.

The players turn consists of two phases. In the first they must resolve a negative result, either losing a life point, placing a catapult to besiege Camelot or drawing and resolving a Black card. In the second phase they move, carry out actions and play special cards.

The game also contains a 'Traitor' amongst the knight's ranks, assigned secretly via loyalty cards, who attempts to undermine the Knight's objectives. Players can reveal him by spending an action 'accusing' another player. This element adds both a greater level of depth and tactical complexity as well as moving the game away slightly from its exclusively cooperative tendency. As we were playing for the first time we didn't play this element of the game.

The Knight's lose the game if the number of  Black swords on the Round Table equals 7 or more, similarly they win if there are 7 or more White Swords. There are only 12 slots and the game finishes when these are full or if there are 12 catapults besieging Camelot at the end of a players turn (in which case the Knight's also lose).

These aren't all the rules or mechanics (there's a few more intricacies) but it at least it gives you an idea of what the game is about.

This game is hard. Real hard. The first time we played we realised we'd made several key strategic errors early on and restarted after only 3 or 4 turns. The second time we did much better and eventually won - by one White Sword - although to be fair we weren't even using the Traitor. When its boiled down the game is chiefly about strategic resource management - you only have so many players and cards, therefore you have to make a plan about what to try and complete and on what to operate damage limitation. You simply can't complete all the quests at once so you have to be strategic in choosing what to invest in, when and how much. There is little point in fighting losing battles. In our game we pretty much ignored the Excalibur quest (The sword is the worst of the magical items you can receive) and focused on the Grail and Lancelot quests, which promised better rewards. This, along with out strategy of avoiding drawing black cards (the special one are really nasty) and instead losing life points and placing catapults, seemed to pay off.  This game seems like it would have decent re-playability, especially given the Traitor mechanism, but it's early days and we'll need to play it a few more times before this becomes completely apparent. There are also a number of modified scenarios in the back of the rule-book for tweaking the game with a mind to playability.

Overall a well put together game with great quality components. The mechanics are simple but in aggregate provide hard strategic decisions requiring cooperative resource management. The immersion is not on par with something like BSG which sees players entering their characters worldview (accusations and counter-accusations flying thick and fast) but this might come out more when we try out the Traitor mechanic next time around. 8 out of 10.
Posted by Samulus at 01:49