Happy New Year folks! I certainly had a good one, three old friends from university came up for a few days and we made our way through many a crate of bear (and most of a bottle of Jura). This does mean I haven't made any posts for a few days but I'm gonna make up for this over the next few days, plenty to do. I don't really make new year's resolutions but if I did, this blog would be one of them!


In my first post I mentioned that I've taken some pictures of some of the spaceship miniatures I have. This isn't all I have; I have lots more either unpainted or in a state of ill repair (broken stands mostly), but here's what was available, enjoy! (apologies for the pictures, I'm still having teething troubles with them and am by no means a natural photographer - any tips would be appreciated!).

First up is an Imperial I class Star Destroyer. I got a lot of my other Star Wars ships from either Studio Bergstrom, Odyssey slipways or WotC's (Wizards of the Coast) Starship Battles game. However, non of these make a star destroyer which is a). the right size (this one is around 16cm, or 1:10,000, my fleet's scale) or b). not ludicrously expensive and/or rare.

This one is from an old Hallmark range of christmas gifts and has pretty damn good detail, not to mention being more readily available. It originally came with a blockade runner attached to the front on a wire which I removed and recycled. At the moment its just mounted on some wire and an old GW base, eventually It'll get one of Bergstrom's large metal hex bases to give it some stability and heft. 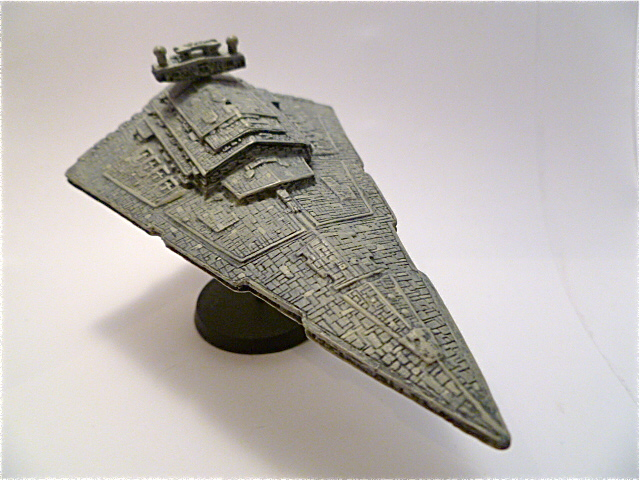 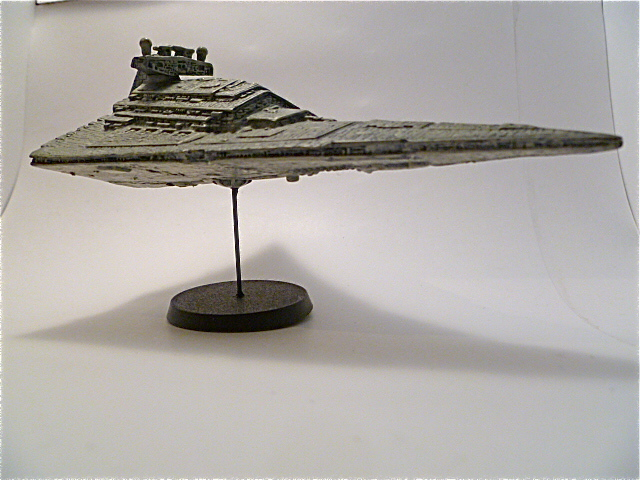 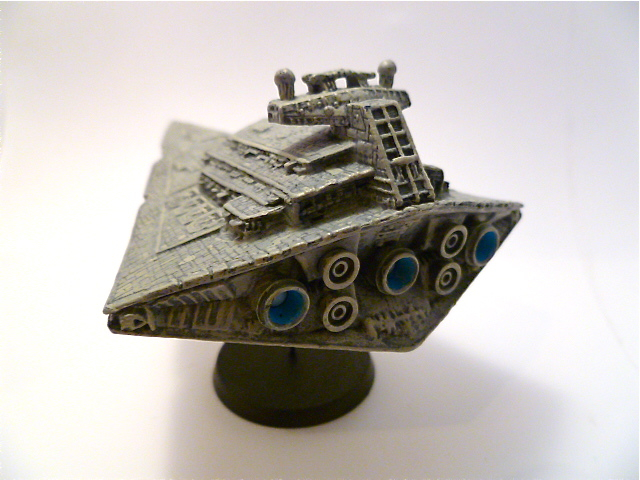 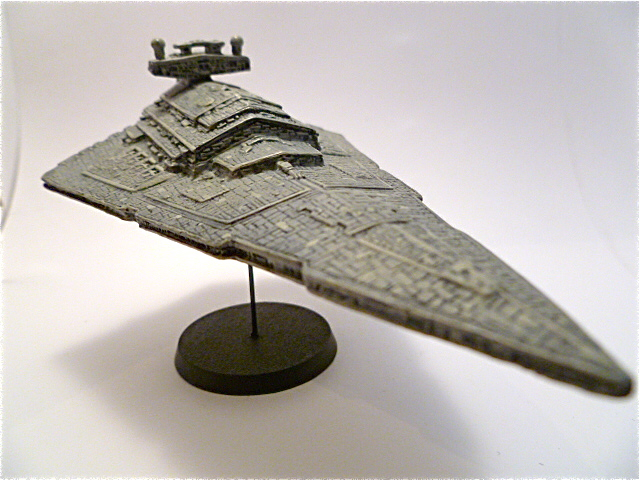 Next up is a Mon Calamari MC-80 Starcruiser (i.e. Home One) from the WotC range with a paint job added. Originally I tried to paint this exactly like the one from the film which if you look closely is made from loads of different coloured panels and pods - it looked crap so I gave up and went with something simpler. In reality this paint job looks a bit better - there's a lot more depth to the hull colour from different washes and drybrushes. Someday I might get round to adding plasma exhaust jets using green stuff or similar to my ships which would really help bring them to life a bit more. 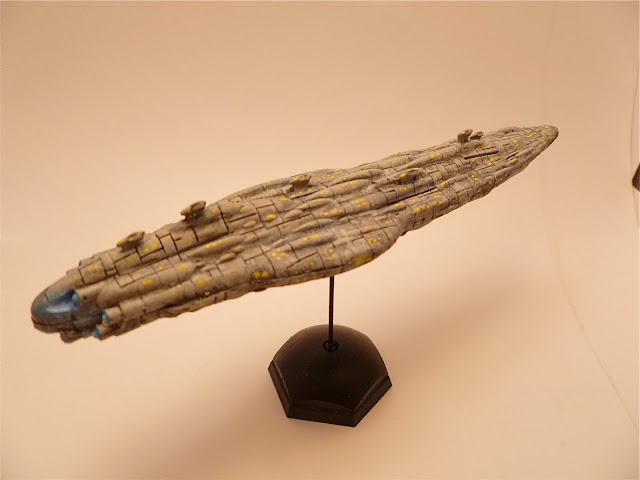 This model is about 14cmish long so it fits well with the Star Destroyer (although it's a little spindley - one day I will scatchbuild my own) if you follow the 'official' MC80 dimensions (1,300m) rather than extrapolations from the films. 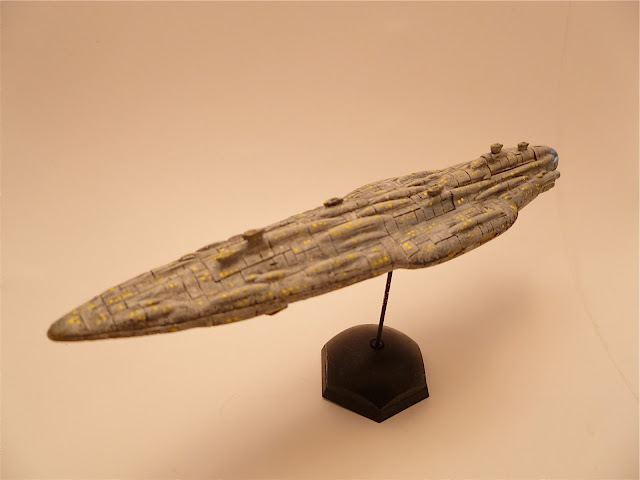 Here's my Mon Calamari MC80 'Liberty type' Starcruiser. Again its from the WotC line with a new paint job and base. Like the other miniatures I have from WotC it could do with some super detailing to get the all the intricate panels and protrusions on the original ships but I'm lazy. I'm quite proud of the colour scheme on this one, its pretty damn close to the one from the films, here's the pics and a comparison: 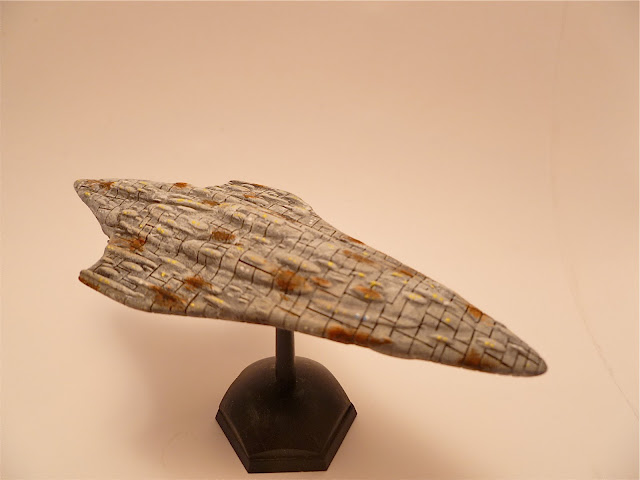 As you can see, its not far off. It needs a few blacker patches. (note: these pictures where taken with both the halogen and daylight bulbs on so they've come out a bit yellow - the colours in the first image are actually much greyer in 'normal' light). 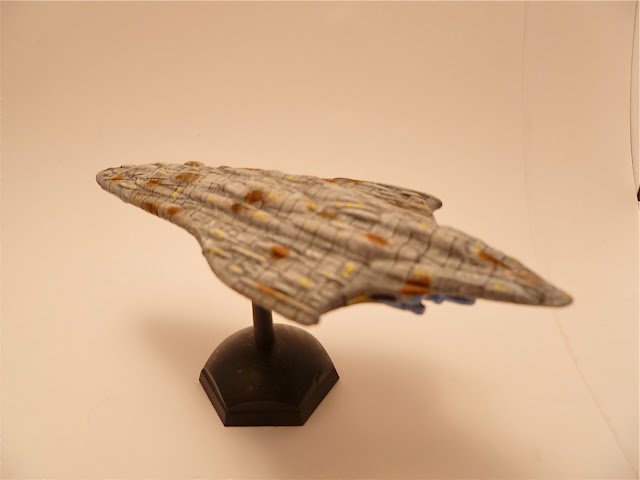 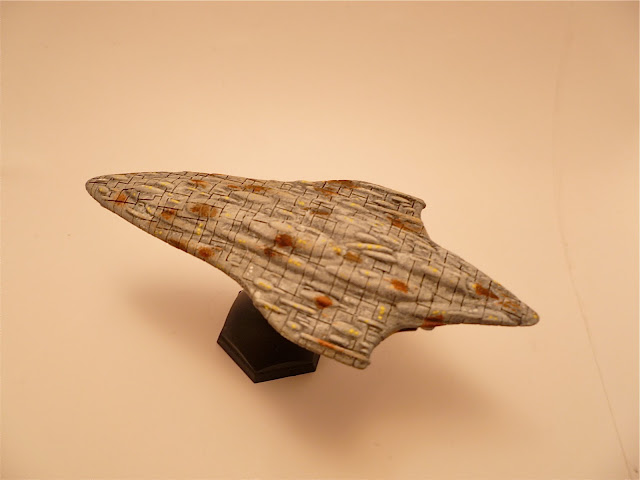 Here's my pair of CR90 Corvettes (Blockade Runners) which were clipped off from my Star Destroyers and repainted. The detail on these isn't great but it'll do until I can get some from slipways sometime. They're also a little large, but I don't mind; otherwise they'd have to be tiny. 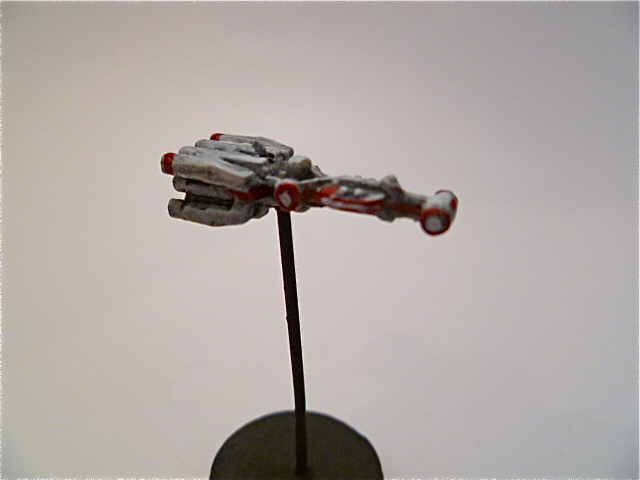 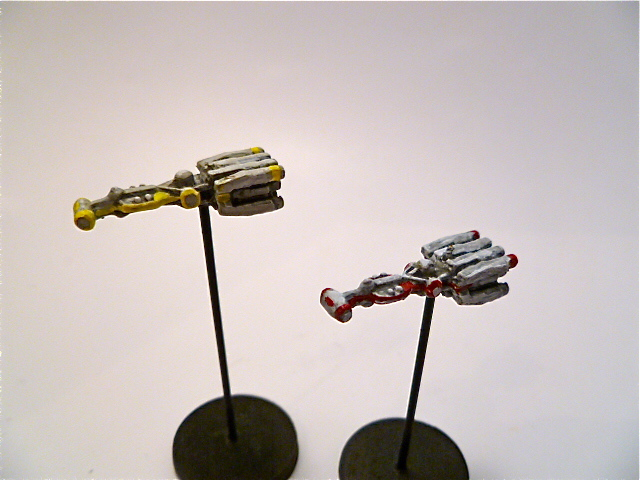 My Rebel Assault Frigate Mark 1 (converted Imperial Dreadnought) from odyssey slipways. This is one of the first I got so the paint job is a lot rougher this close up. I really like the design aesthetic of this class, it really looks like what its meant to represent  - a hastily refitted and modified warship. As its from slipways its 1:10,000 scale (about 7-8cm as I remember). 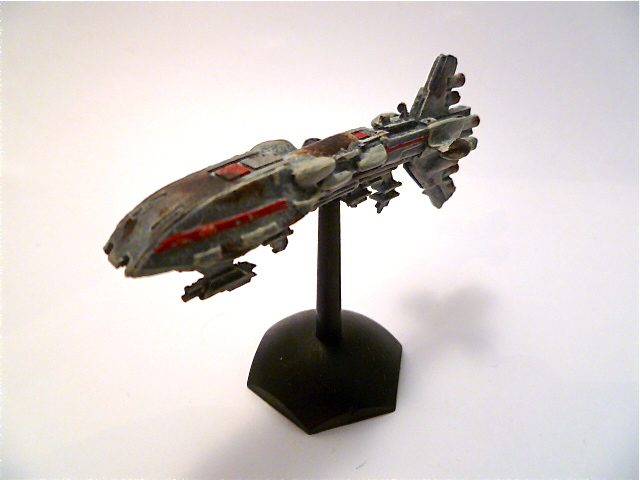 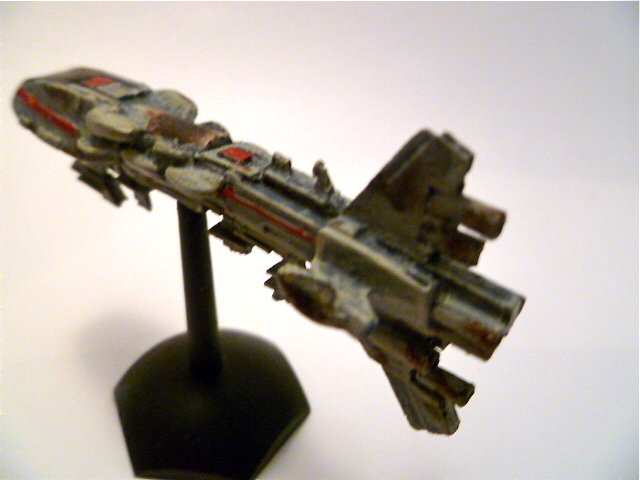 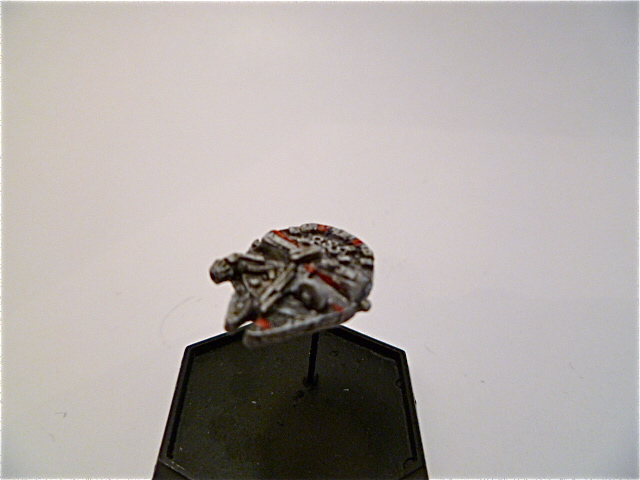 My X-Wings. I mount my fighter squadrons two to a base like this ( I can't afford to have 6 and 2 looks almost as good as 3 in my opinion). The bases were super cheap plastics (always good for fighters) from em4 miniatures. I really didn't like the ones from Bergstrom; they're made of silicon, don't take paint and are grey (although I think he may have changed them to black by now). 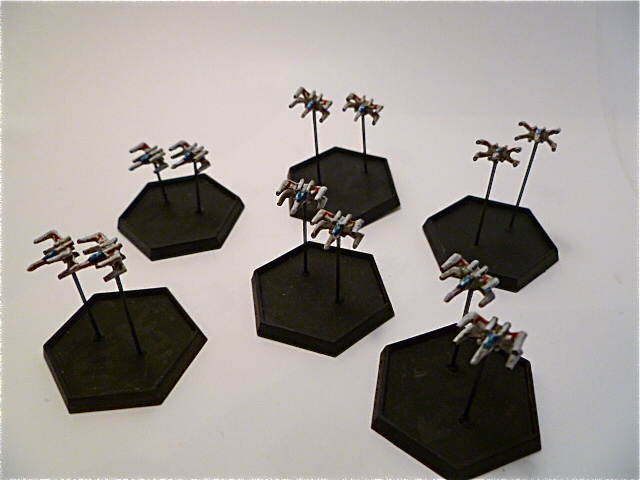 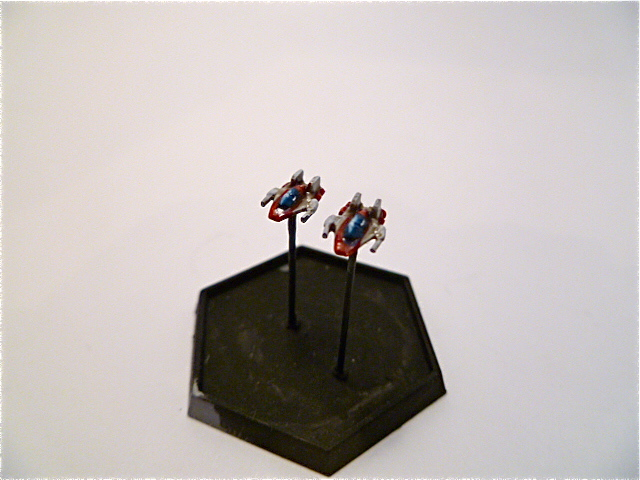 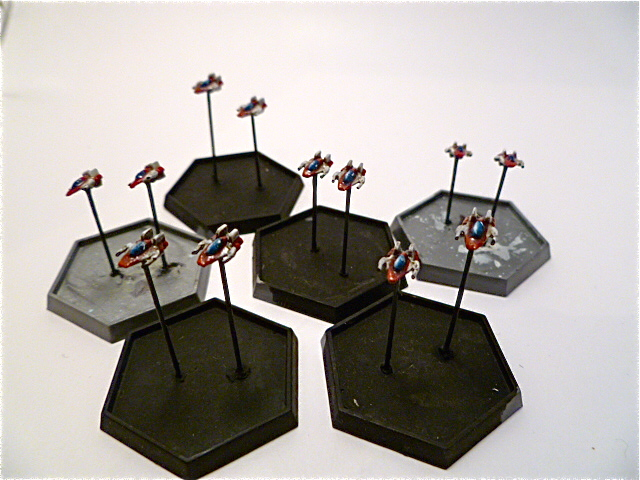 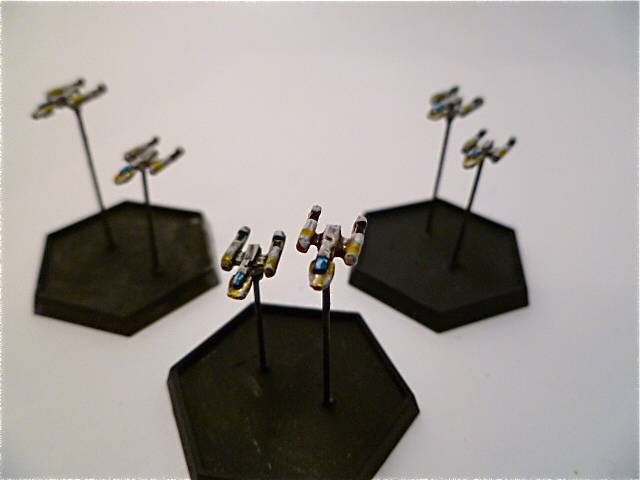 B-Wings. These sculpts are probably the worst of the Bergstrom fighters I have, although the Tie interceptors are also too small imo. 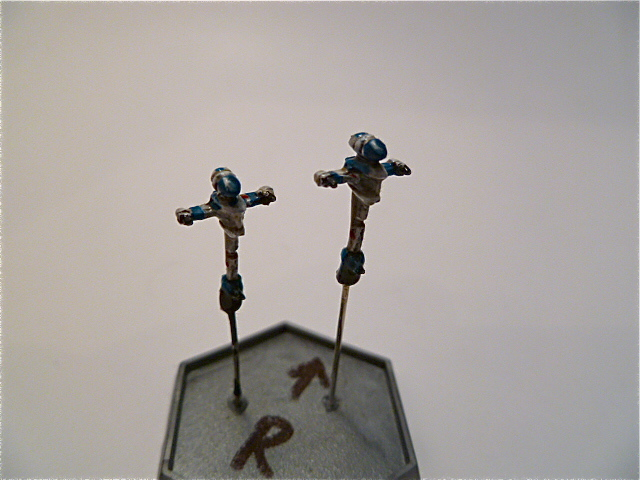 Tie-Fighters. These still need their final highlight. I also have some Interceptors and some Tie Bombers but I have yet to paint them so I didn't bother to take pictures. 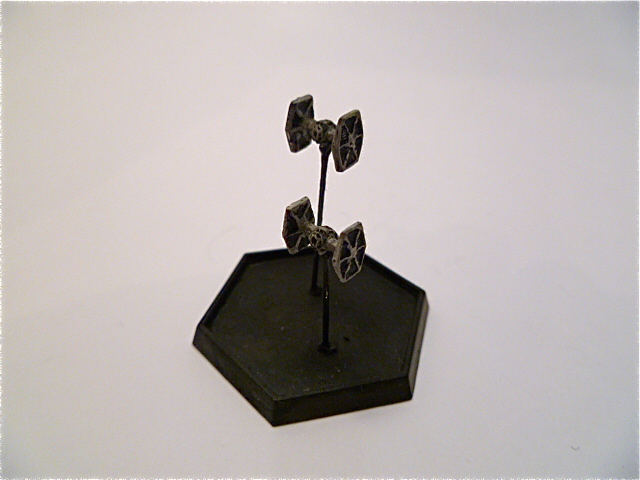 I have a few other painted Star Wars ships; a couple of scratchbuilt ships with a Star Wars universe 'look' as well as a trio of nicely detailed Nebulon B frigates. However, they've all suffered some terrible accidents whilst in storage and are in poor shape, some serious pinning needs to take place - especially on the nebulon Bs which are in scale and thus tiny. I also have another Star Destroyer to paint up and base, three die-cast Venerators to repaint and base, 3 micro-machines star destroyers to convert into Victory class Star Destroyers (although I might just end up scatchbuilding them instread) and some trade federation battleships I got super-cheap from ebay to toy with... In the latter's case I would need to scratchbuild the fighters for them if I got round to building them but thats a challenge for another day.

I've taken a few pictures of my BSG stuff but need to dig the rest out and do some fixing-up - stay tuned for another fleet review in the near future! Tomorrow I plan to have a go at airbrushing my FOW armour. This is probably going to turn into a nightmare but I'll let you know how it goes, along with some pictures hopefully.

I'll leave you with some pictures of the rebel fleet. Adios. 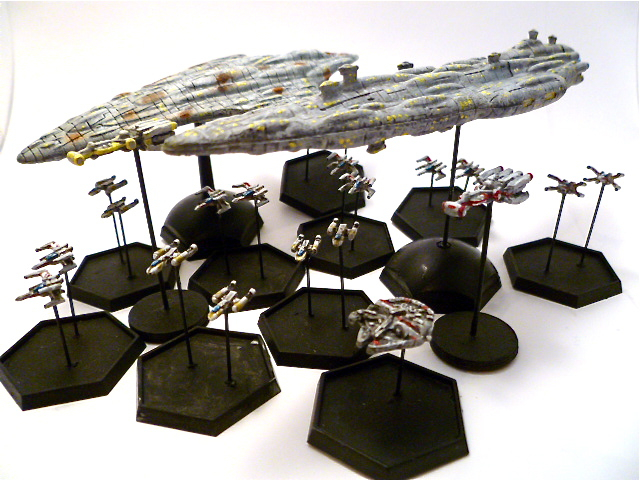 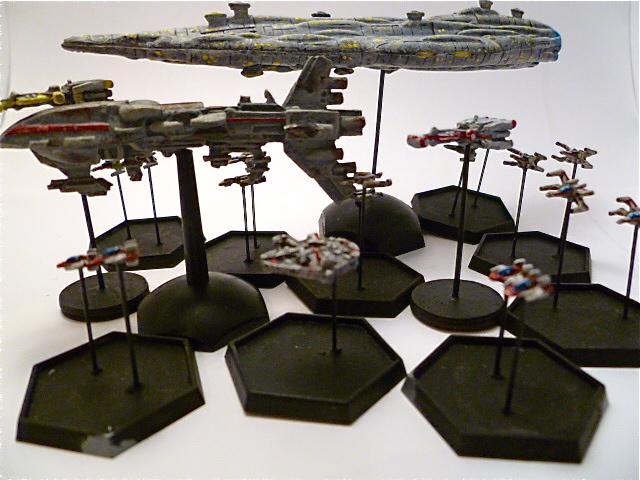 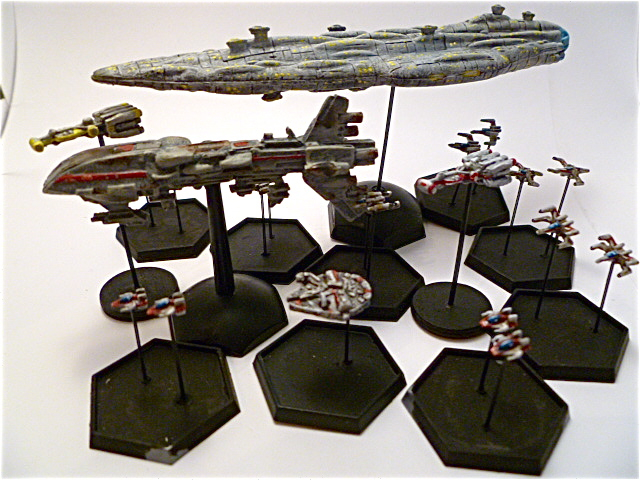