From the outset its worth saying that I only played each of these games once and therefore all my conclusions come from the context of the specific scenario being played. These are more my impressions than a comprehensive review.

I managed to get in three participation games at Salute on Saturday; a game of Critical Mass, a game of FOW Vietnam and a game of 7tv. I'll talk about the FOW game first as it acts as a good counterpoint to the CM game. 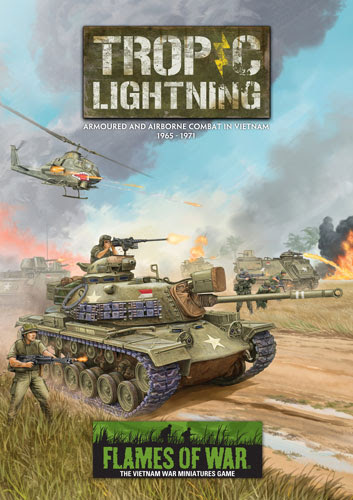 For those living under a rock, this is Battlefront's foray into the Vietnam War in 15mm scale. Its played using the same game engine as their WW2 system.

The scenario I had a chance to play was a meeting engagement (with no objectives except annihilation) between a US armoured company with Air Cavalry support and an NVA force with lots of AA, RPGs and Recoilless Rifles. I enjoyed this game a lot. The GM was always on hand with the rules, gave clear explanations, and my opponent was good-natured and ready to throw around some lead and dice.

I'm not going to give a blow by blow but basically the armour and helicopters came forward, I dug in, and then a short-range gun battle ensued in which both sides took heavy casualties. Men of the match went to my NVA platoon (middle of the pic above) which held up under extreme fire, assaulted two US armoured platoons, taking them out, and survived repeated strafing runs from the helis. Charlie is tough man.

The game was fast and furious. The game mechanics were intuitive, logical and made sense, after turn two we were running it virtually by ourselves. Because the vehicles and weapons were broadly recognisable it wasn't too hard to figure out what they were for and what they should be able to do. It was a fun game, not high strategy, but fun.

Critical Mass is Critical Mass Games' 15mm company-scale sci-fi combat game where armies consisting of  4-5 platoons of tanks, walkers and infantry square off. I was fortunate to play on the truly beautiful Jungle table they had built for the con, although the LOS issues turned out to be a bit of a pain.

This game was, for me, the opposite of the FOW game, despite the fact that many of the mechanics had obviously been copied from that system (e.g. unit's had a 'ranged defence' which functioned like the FOW quality rating and units had standard  'infantry saves', despite the fact they were different species with different qualities of armour). I didn't really have much fun, although I think this might have had something to do with the fact I was playing against a bored looking 7 and 4 year old. In the end analysis the game ended up being me playing the other GM whilst my GM tried to redress the balance with some helpful advice.

To give CM the credit it deserves the alternating activation sequence worked extremely well and served to keep both players involved constantly, I really liked this feature. However, I felt that the forces felt a little flavourless for my liking, although this might have been because they omitted certain special rules etc for the demo game. Compared to the FOW game, where all the units were broadly recognisable, I found that in the CM game I was guessing at the units' capabilities; there was no time to compare their stats with my opponents and find out what the strengths and weakness of my force were. As it turned out my tanks were crap and my infantry were ace, my sluggish advance with the latter failed to take advantage of this and my extremely lightly armoured skimmers were destroyed by heavily-armoured walkers anchored in cover, preventing flanking.

I did feel a little like I'd been playing the GM, an experienced player, and he used that experience to unfair advantage, after all, when playing the FOW game I had given my opponent numerous pieces of advice or useful observations, to my force's detriment, in the interests of a fun game.

Overall, I'd say that I haven't come to a clear conclusion on this game. The core mechanics seem to be there, although there are some features such as the vehicle damage table which feel unnecessary, and I think it has potential, even if the forces felt a little bland at first glance. I think further exploration might prove this to be a good system. However, with the imo mixed quality/appeal of CMGs minis I won't be using the official mini lines but an 'all star' mix of the whole 15mm crowd.

7tv is a light-hearted skirmish game which aims to recreate the feel of cult-tv shows and movies such as the Avengers, Austin Powers and Doctor Who. The game is scenario driven and more for the lols and ratings than for the win.

The 7tv crew had several games running at the Con, all looked great, especially a huge Charlie's Angels style assault on a super-villain snow fortress. The game I was involved with was a one-on-one scenario set in the streets of small english town. The Avengers were attempting to reach a red phone box to call the police whilst the evil townsfolk and their robot-scarecrows were attempting to stop them.  The game was quite short and very difficult for the bad guys - I ended up winning in around four turns by getting Pandora King to the phone after judo chopping my way through morris dancers.

The system was fast and fun and really captured the feel of the genre it was attempting to evoke. 'Audience appreciation' was a nice feature which gave a number of chits to each players (dependent upon the difference in the players initiative rolls) which could be used to add or subtract one from a die roll during their turn. Very useful for getting out of sticky situations! The heroes also had 'luck' points which allowed them to do something similar and to keep alive or make key actions at key times. My heroes also had a couple of one use gadget cards, a tech scrambler and a mini flame-thrower, for use at opportune times. This added a great 'James Bond' style feel to the game.

Overall this was a great little characterful system which I will be using with my very limited Doctor Who collection (currently two figures...) if I feel the need for some adventuring fun. Very much recommended for this sort of thing.


Have you played any of these systems? What did you think? Did you have a different experience of play at the con? Let me know in the comments!